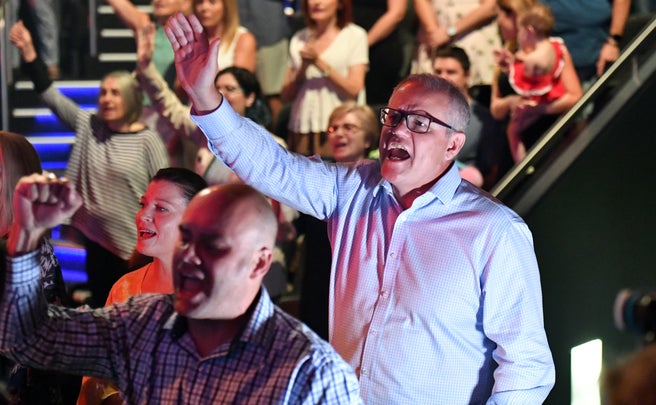 There was ScoMo just last night, his right hand likely raised heavenward, surrounded by 21,000 devotees at the Australian Hillsong annual conference, pontificating about what Australia needs now: “More prayer, more worship and more love because “that’s how things are overcome”.

A noble sentiment perhaps, but reflective of modern, secular Australia? Not so much.

Referring to the government’s proposed religious freedom legislation, he reportedly went on to proclaim the government would “do what we need to do” from a lawmaking perspective to protect people’s religious rights, adding, “I speak about my faith… because I want everyone in this place to feel comfortable talking about faith in this country. It’s not a political agenda, it’s who we are.”

But is it really, PM? It may be who the PM and Hillsong devotees are, which is all well and good, but it is not who Australia is in 2019.

In fact, Australian census figures reveal that the number of Australians who identify as having “no religion” are now the most numerous response to the question of religion — at just over 30 percent. Those respondents eclipse people who identify as Catholics, Jews, Lutherans, Baptists or, ahem, Hillsong Church members.

As British writer and ethicist AC Grayling has written about those seeking special privilege for their religious beliefs: “On the contrary: to believe something in the face of evidence and against reason — to believe something by faith — is ignoble, irresponsible and ignorant, and merits the opposite of respect. It is time to say so.”

In fairness, Mr Morrison chose his words very carefully at the Hillsong conference this week. He described freedom of belief as “fundamental”, and reportedly said Christians should ‘prioritise love over judgements and lectures’.

But as the Israel Folau controversy has shown, religion can and frequently has been used as a weapon to further stigmatise and persecute gays and other minority groups — and there are fears that the PM’s so-called religious freedom laws will give legal license to further discriminate.

The real-world consequences of this for the rest of us could impact everything from our rights to work, identify how we want to, or even which schools our children can gain entry to.

I wonder, for example, if Scott Morrison’s call for “more love” extends to those who don’t fit his hetero-normative mould — particularly given he was one of the strongest “no” advocates preceding the same-sex marriage vote. I further question if Morrison’s brand of “love” extends to transgender teens looking for support from bullying within their own schools, given the PM has consistently opposed Safe Schools programs and warned of “gender whisperers” in our midst.

Already, just early days in his term of office, Mr Morrison is showing himself to be perhaps the most open and fervently religious Prime Minister this country has ever seen. And to be clear he is certainly entitled to his own religious beliefs as we all should be. But that doesn’t give him the license to claim that religion is somehow at the core of Australia’s national identity in 2019 — nor that it represents a vast majority viewpoint.

Later in his speech the PM stated: “The freedom to believe is so important, that needs to be nourished and that needs to be protected. What this country needs more than that is the love of God.”

Yes, Prime Minister, no-one is trying to take away anyone’s right to believe what they want. But the second point is simply his own opinion, so here is mine: if your ‘love of god’ gives people a license to discriminate, exclude, or further alienate already marginalised people — then to me that is not about love, it’s about religious privilege that has no place in a secular democracy like ours in 2019.

Particularly when the majority of Australians simply don’t share your faith.

One thought on “What Australia Needs Is Freedom FROM Religion”