Salem, Oregon: Hundreds of faith leaders, low wage workers, civil rights activists and unemployed people gather on the steps of the Oregon State Capital building in Salem to participate in a nation-wide revival of the Poor People’s Campaign – a civil disobedience movement started by Martin Luther King 50 years ago.

The 40 days of non-violent direct action campaign, running between May 13 and June 23, aims to provoke a national examination of the enmeshed issues of poverty, income equality, racism and ecological destruction.

Since its launch last week, more than 1000 people have been arrested in demonstrations in more than 40 state capitals from New York to Washington, as part of 40 days of non-violent direct action. In Washington, dozens of protesters sang hymns and chanted as they crossed police lines to be arrested. Similar scenes took place in California, North Carolina and elsewhere.

Organisers say that King’s dream of a multicultural, multifaith coalition to lift Americans out of poverty through higher wages and better living conditions remains largely unfulfilled half a century later.

The newly reinvigorated effort, ‘The Poor People’s campaign: A National Call for Moral Revival’ was started by co-chairs William Barber, a pastor from the Grenleaf Christian Church in Goldsboro, North Carolina and Liz Theoharis, an ordained minister and anti-poverty campaigner from New York City.

It has quickly spread across America through a coordinated series of demonstrations and campaign strategy discussions in several capitals.

“We are not launching a new poor people’s campaign, we are taking up where Doctor King left off when he was assassinated in Memphis,” says Alyssa Pariah, the Oregon organiser for the campaign. “Fifty years later, we see it as our duty to pick up where he left off in a way that’s meaningful and benefits peoples lives.” 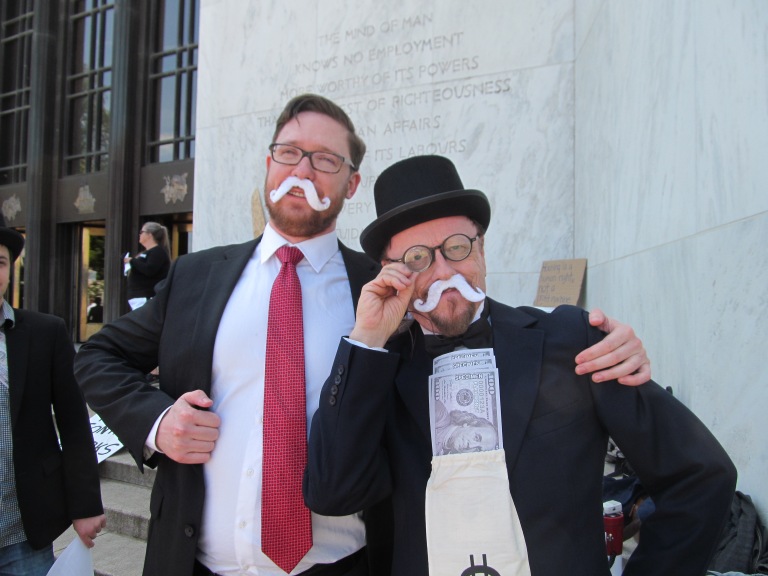 In Salem, the focus of the demonstration is Oregon Governor Kate Brown and her plans to hold a special session of Congress to propose a tax concession of $US11 million ($14.5 million) to wealthy business owners. Fairfax Media attended a pre-rally gathering in the St Mark’s Lutheran Church where participants gathered to share to discuss their experience of racism and plan more local action over coming weeks.

“We are raising the question of taxing the rich, rather than giving them more tax cuts, to provide basic services. We are asking ‘where is the special session to deal with endemic homelessness and poverty’?” Pariah says. “On the national level, we are raising taboo questions about poverty in politics in this country.

According to ED Mondaine, president of the Portland National Association for the advancement of coloured people (NAACP) and keynote speaker at the rally, the Poor People’s Campaign is quickly becoming a nationwide movement for change.

“If we are ever going to see a movement again in this country that resembles the great garrison that happened when Dr Martin Luther King described the great unsettling force being loosed upon the nation – this is it. He understood the power of unity among the poor – we are taking up that challenge.”

Mondaine says having Trump in the White House has given energy and urgency to the moment.

“We had a black president in America and I think all of our liberal folk in the world thought that we were OK. That somehow we had finally overcome [prejudice] – but we hadn’t. After Obama left office the lights were turned on in America and we saw roaches scattering everywhere.”

Reverend Lynn Smouse Lopez from the Ainsworth United Church in Portland said she has spent 30 years working with the poor and people of colour, so it was a natural fit for her church to join the national campaign.

“The pillars of the campaign are fighting systemic racism, poverty, ecological devastation and what we call the military and mass incarceration economy in America,” she says.

Although the campaign had its origins before the Trump Administration, Reverend Lopez says the current political climate in America has certainly energised people on the national level.

“I have to say that Trump has been one of the biggest organisers for our side because people are just reacting to the ugliness that has been coming out of the White House. I do think that has given a lot of energy and motivation to many of us.”

According to Margot Black, organiser with a group called Portland tenants united, the effort is a continuation of the Occupy movement that spread across the US at the start of this decade, only with a pro-active focus of putting the poor and people of colour at the front and centre.

“I think it was during the Occupy movement when people seized on this idea that the game is rigged,” she says.

“People realised it’s not just hard to be poor in America – it’s actually unjust. It’s this idea that if you aren’t rich in America, then you have failed as a human and it’s your fault that you’re poor and suffering.”

“People are now grasping the idea that poor people can have power, and that poor people deserve dignity and that there are more of us than there are of them. This has been brewing for a long time and we have kept seeing more and more cuts to our social safety nets. Things like raising the minimum wage, improving healthcare – for the working poor these are things we think about every single day,” she says.

“I think we are just starting here. The fact that this movement has already gained as much traction as it has is inspiring us. We have to keep banging on the drums and we have to believe we can win.”

The protesters will return for non-violent direct actions across the country every Monday until June 23 with a different theme each week including child poverty, racism, women and the environment. At the end of the 40 days, activists say people from around the country will gather in the US capital Washington for a mass demonstration.

This story first appeared in The Age and SMH