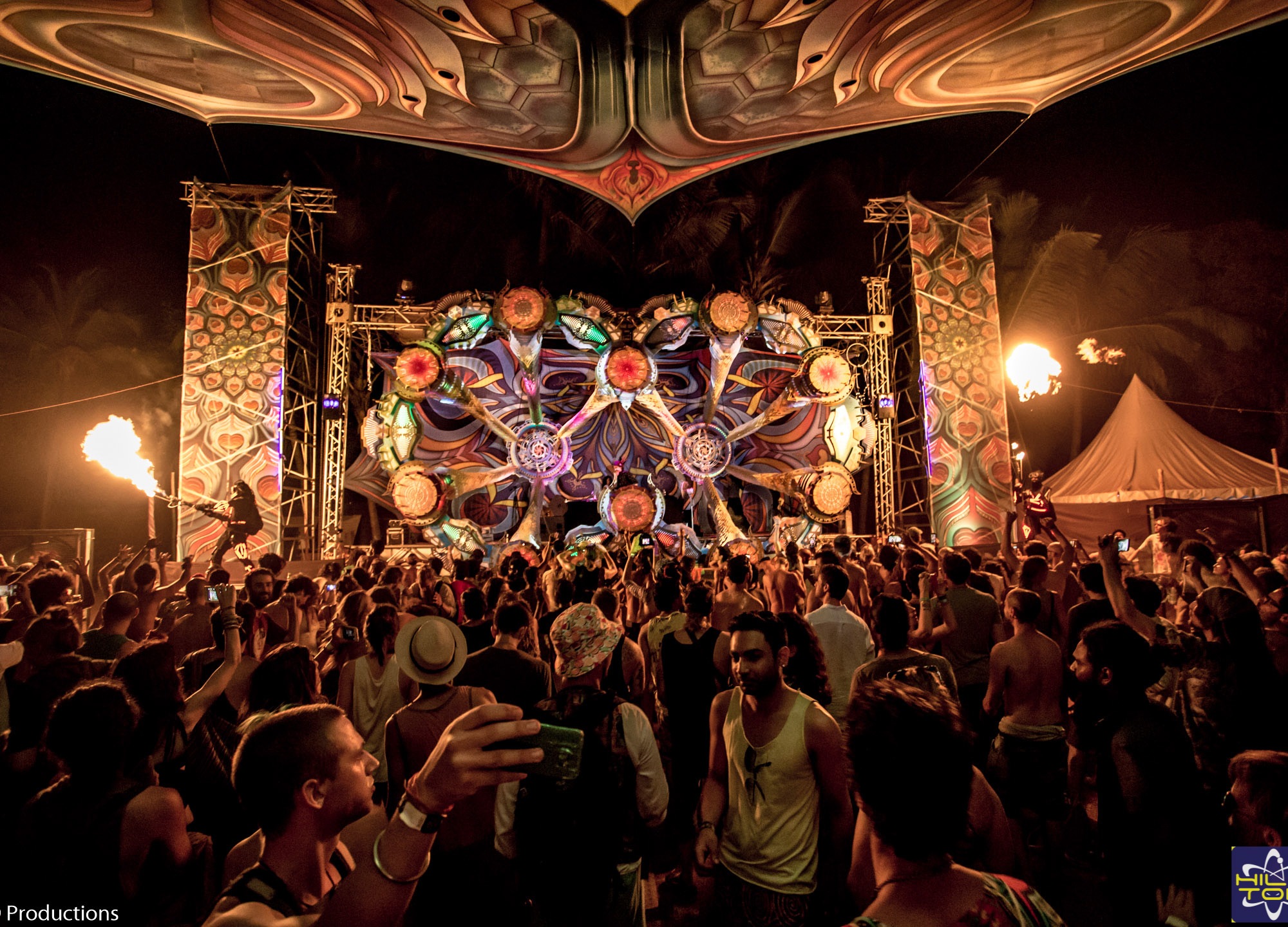 Goa, India: On a blazing hot February Friday afternoon about a kilometre from the Arabian Sea at Vagator beach, Goa, an international techno trance DJ is playing as the sun sets. About 1500 revellers dance to the beats, kicking up clouds of red dust under bare feet.

The crowd is a mix of European, Japanese and a smattering of Australian travellers, mingling among the young Indian revellers, many of whom have travelled from neighbouring Indian states just for the party.

The atmosphere at the Hill Top festival is electric, with laser projections and a massive speaker stack pumping out psychedelic techno tunes.

The coastal state of Goa in southern India has long been famous for its hippies and beach parties. And now, thanks in part to the power of social media and India’s booming young middle class, a new burgeoning underground music scene is taking off with a fresh crop of Indian DJs and techno enthusiasts.

Much like the rave party scene in Australia and elsewhere, in Goa these parties have faced widespread criticism and recent crackdowns from authorities who say they are often held illegally without police permission and are riddled with drugs.

Following the death of two Indian tourists at separate rave parties in Goa in August 2017, police locked down the party zones around the village of Anjuna and Vagator for several weeks and a 10pm curfew has been imposed. For those who seek them out, however, there are still all-night parties taking place in secret locations.

Goa’s Chief Minister Manohar Parrikar has been one of the most vocal opponents of all-night rave parties, claiming the entire coastal region is infested with the sale and trafficking of drugs.

“There is absolutely no control over it. We need to stop it. First of all, we need to stop the rave parties and all-night parties which are happening here, as there is abuse of drugs in them,” he says, adding they are not part of the traditional culture of the area.

For much of December, the peak tourist and party season, most techno venues in Goa were closed by the police. Last month at Ashwen beach in Goa, the British-organised GOAT festival was cancelled just hours before it was due to start, with local authorities saying the required permission to stage the party on Indian Republic Day, January 26, had not been granted.

When Fairfax Media visited the GOAT festival site, the organisers had fled the scene, leaving no explanation to the bitterly disappointed and short-changed punters – some of whom had travelled from Europe and paid a 9000-rupee ($180AUD) entry fee online for the three-day festival.

Meanwhile, at the Hill Top festival in Vagator, the party continued. British headliners Shpongle took to the stage, electrifying the crowd with music accompanied by impressive fire juggling and dazzling projections onto the metal sculpted stage.

For Shabhun Argarwal, a 27-year-old data programmer who I chatted with at a chai stall beside the dance floor, it’s been well worth the 800-kilometre train journey from Bangalore.

“We first heard these DJs via YouTube and SoundCloud,” he says, “but for sure having the chance to see these acts here in Goa is definitely worth the trip.

“In India we have to work hard to party hard.”

Indian DJ Arjun Vagale, who is often considered the pioneer of techno in India and regularly performs in Berlin, New York and Goa, says he is acutely aware of the wealth divide when he plays at parties in India: “It’s very evident, and as an Indian you live with it every single day … just step out of your home and the poverty is the first thing that hits you in the face.

“But I do feel that the underground scene is trying to be a bit more accessible, like sometimes offering discounts to students … and that really helps bring in fresh faces, looking for the counter-culture.”

India is among the world’s fastest-growing economies, and the UN predicts India’s population will overtake China’s by 2022. The median age in India is just 27 and more than half the population are under 25.

But the wealth disparity in India is still stark and slum areas sit alongside underground party venues which are still mostly accessible only to relatively wealthy Indians. The 3000-rupee ($60) entrance fee for the Hill Top party is equivalent to almost 10 times the average Indian daily wage of 324 rupees ($6.50).

Along with the country’s gradual economic growth, India’s youth are looking for more sophisticated cultural offerings. Despite the wealth disparities, there are more young Indians with higher disposable incomes than ever.

“The young middle class is far more exposed and wants a top-class experience in their home towns,” says Dev Bhatia, co-founder of UnMute, an Indian artist management agency and music consultancy based in Delhi.

“The internet and mobile penetration has played a major role to quicken this process. There is a lot happening in the country currently. Top DJs coming down every weekend, multiple options for audiences, world class festivals and a high quality of local artists. If anything, we’re getting way more organised with support from sponsors.”

According to Hill Top party organiser Varun Taljera, 34, who says he has been obsessed with electronic music since he was 13 and organised his first party at 17, the difference between the rave scene today and that of the ’90s is that young, affluent Indians have gravitated to it.

“The Goa trance scene started here in the ’60s from people who came from all over the world. The Indian elite only joined more recently. Today it’s a melting pot for all – you can dance next to a billionaire and a bum.”

Taljera says the party organisers now work with authorities to make sure all the requirements are met – including finishing the party at a reasonable time and keeping the events drug-free.

“It’s not really an illegal rave party scene, as it was in the past. Those days are gone. These are now events that are all very legally regulated and operate per the guidelines given to us by the authorities,” he says.

However, as with much else in India, snail-paced bureaucracy, excessive government regulation and corruption are still stymieing the evolution of India’s electronic music scene, Bhatia says.

According to Saagar Chodankar, who runs a guesthouse at Anjuna beach, about a third of his clientele are Indians looking for a party holiday destination and the rest are international travellers.

“Goa is known all over the world as a top destination for techno – this place defined the whole Goa trance movement,” he says. “I don’t think they should stop the parties here – people should be free to go to them and have a good time. We locals also know that if they stop the parties then people will just stop coming here. There needs to be a reasonable balance,” he says.

In the face of stiff opposition from authorities, in Goa and in India more broadly a new homegrown rave scene is taking off – and it has become the sub-culture of choice for a new generation of middle-class Indians. Despite the limitations of equity, accessibility and over-regulation, Bhatia says it is a very fertile period for underground music in India.

“We have amazing festivals like Magnetic Fields, Vh1 Supersonic, NH7 [Weekender] and so on and many smaller city festivals and great gigs to look forward to. On the flipside, we face various random legislation issues,” says Bhatia.

“So while it is a good time for the rave scene in India, it is also a really weird time.”

But as the the 10pm curfew kicks in and the pounding beats and spectacular visuals at the Hill Top party come to a close, it’s easy to understand the appeal to young Indians of a new homegrown underground music scene that is easily on a par with the world’s best.

This story first published in the Saturday Age