The New South Wales capital has long been recognised as one of the top destinations in the world for LGBTQI travellers, and around Mardi Gras time, you’ll feel like the whole city has turned gay.

We probably don’t need to tell you that much of the party action in Sydney occurs around Oxford Street in Darlinghurst and King Street in Newtown, or that the most popular gay city beaches are at North Bondi and Tamarama.

Instead here are some less obvious things to make your stay more memorable. If you’re looking for slightly less busy beach options, La Perouse at Little Congwong is a better place for a picnic and frolic, while Lady Jane and Obelisk beach all attract a diverse queer crowd.

For those looking for less mainstream and more creative party options outside the regular haunts, try Club Kooky, Lovecult 2000 or hot new queer kid on the block Dishy – all offer alternative Mardi Gras parties catering for the underground queer community. For a lesbian-friendly bar in Sydney try the Sly Fox in Enmore on a Wednesday night.

My favourite gay guest house in Sydney is Governors on Fitzroy in Surry Hills, a place that feels a bit like staying at your super-posh uncle’s house – but book ahead because this place is popular (if you haven’t already booked in for Mardi Gras – good luck). And if you’re looking for a grunge old-school queer café try Satellite in Newtown. 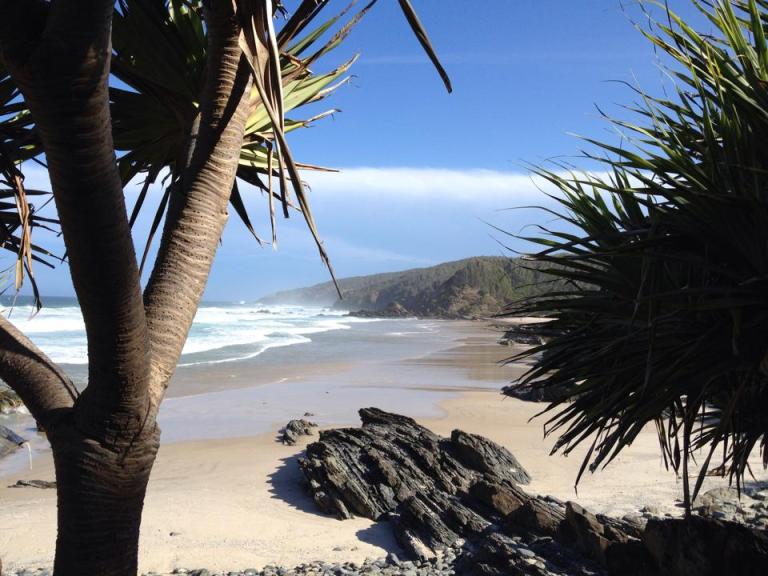 Nestled about 20km south of Byron Bay in Broken Head National Park, along a dirt road (all-vehicle access), down a steep but manageable 1km walking track, awaits a white sandy surf beach amid beautiful trees and rocky outcrops that may well be the most beautiful “gay” beach in the world. This is a paradise where naked folk (it’s clothing optional) frolic in the shallows or set up their picnic rugs under the shade of the trees that line the beach. On a clear summer day, the scene on the beach looks like it’s taken straight from a Pierre et Gilles photograph.

The entire north coast of NSW, affectionately known as the rainbow region, is well worth exploring by car. Take a drive around the foothills behind Byron Bay and head inland to Bangalow and on to Lismore – small towns like The Channon, Bangalow, Mullumbimby, and even Nimbin (the marijuana capital of Australia) are very queer-friendly and enchanting places. For those wanting to dig a bit deeper a local queer party collective aptly named the Tropical Fruits put on legendary gatherings about four times a year in various locations in the area.

Often called Australia’s cultural capital, Melbourne draws much more influence from Europe in its architecture, fashion and food – and for the gay traveller it may feel like a more chilled out and refined experience after the glitz of Sydney. Melbourne is a city of less ostentatious delights than its northern cousin, regularly voted the world’s most liveable city – so set some time aside to relax and explore.

Visit Hares & Hyenas queer bookstore in Fitzroy, and while you’re there grab a coffee at Mario’s cafe around the corner in hip Brunswick Street. Better still, do an art tour of Melbourne – check out the Centre for Contemporary Photography in Fitzroy, visit the NGV and ACMI at Federation square, and take a drink overlooking the Yarra at Riverland.

The gay scene in Melbourne is basically divided between the north side and south side of the city. In the north side the best options are Sircuit Bar (mixed on Tuesday and Sunday) or The Laird for guys of the bear variety, while The Greyhound in St Kilda is a good pick for a mixed weekend party featuring ‘Boylesque’ performances.

The best Melbourne queer parties are irregular underground events such as Trough and the much more female friendly mixed 80’s disco beats of Grouse and Closet Party. If your looking for a place to stay you won’t find better than The Brooklyn Arts Hotel in Fitzroy – set in a classic old Victorian terrace and just a short walk to the city and the north side queer hangouts.

Just under two hours north of Melbourne, the Swiss-Italian founded town of Daylesford (often affectionately known as Gaylesford) is an oasis of crystal-clear springs, beautiful lakes, massage and healing retreats, and a surprisingly cosmopolitan main street with Melbourne-quality coffee.

Daylesford is popular at this time of year, so book early and check you and your squeeze in at one of the gay-friendly guesthouses such as Lakeside at Daylesford or the Green Door and spend a rejuvenating weekend having a long brunch at Breakfast and Beer cafe, perusing the book and antique stores, walking and swimming at the lakes, indulging yourself with a massage or tantric healing session, or visiting one of Daylesford’s many galleries such as the beautifully renovated Convent Gallery.

If you arrive in Daylesford on the weekend of March 7/8th, you’ll encounter the ChillOut Festival – Mardi Gras’ daggy but adorable cousin. This is the weekend when Daylesford turns truly queer, featuring dance parties, exhibitions, a hilarious street parade, and an outdoor fair day featuring everything from drag shows to dog shows.

Tasmania has come a long way since it became the last Australian state to pass gay law reform in 1997. Today it boasts a small but visible gay scene in Hobart and Launceston, and offers many good options for gay travellers. Hobart even has its own LGBTQI dance bar at Flamingos, but in truth one wouldn’t travel to Tasmania to visit gay night clubs.

In fact you’d be more likely to come to Tasmania to get away from parties and soak up the beauty and culture of this southern island state. Any trip to Hobart would not be complete without a visit to Mona, the Museum of Old and New Art in the Berriedale peninsula in Hobart, which houses some of the best examples of provocative modern art you’re likely to see anywhere. My advice is to spend the night in Hobart at the charming gay-owned Corinda’s Cottages taking in the cafes and galleries around the beautiful sandstone buildings at Salamanca Place, then hire a vehicle and hit the road.

Outside Hobart, make your own adventure. Towns like Cygnet in the Huon Valley the historic Port Arthur retain an arty and bohemian edge. Tasmania also now has more acknowledgement of its same sex history in tourism information including early gay explorers, convict love and “pseudo-males”.

For the more adventurous in the summer months towns on the east coast such as Coles Bay and Bay of Fires offer breathtaking coastal ambience and offer near seclusion if you seek it. The Lumera Echo Chalet provides excellent queer accommodation and travel advice for this region. Tasmania also offers some of the best hiking and mountain climbing in Australia. Cradle Mountain-Lake St Clair National Park (approx halfway between Strahan and Hobart) offers stunning day walks, while the Walls of Jerusalem National Park or the Friendly Beaches in Freycinet National Park are fantastic spots for camping or taking longer hikes into the wilderness.