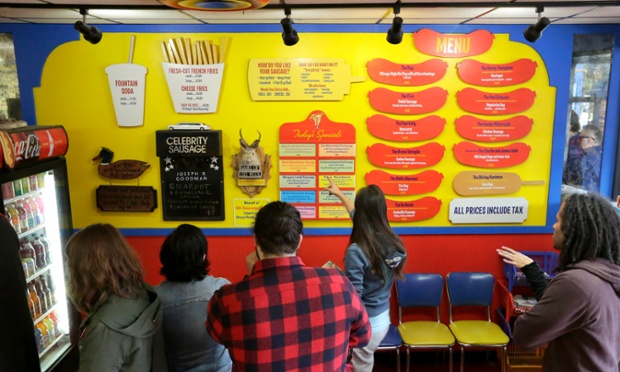 Any Australian who has travelled around the US would know that one thing you look forward to in returning home is the food.

There is a lot to love about the US, but American restaurant food mostly sucks. Its often monocultural, usually dripping with fat, and super-sized to the point of obscene. In contrast, the offerings back home draw influence from all over the world (with a strong Asian infusion) and are frequently prepared from much fresher and more local sources. Which is why it has been with increasing dismay that I’ve witnessing an Americanisation of Australian inner city food outlets for some years now – as though its suddenly cool to emulate and fetishise the worst aspects of US fast-food gastronomy. For a vegetarian (or pescetarian like me) this is nightmare territory. If there are any upsides to this, it’s that the new wave of diners tend to be well-designed and have a good buzz.

Take Boston Sub at the grungier Windsor end of Chapel Street in Melbourne. Staffed by shaven-headed bearded gents selling gourmet hot dogs containing fillings such as ‘pulled pork with apple and celeriac remoulade’ served with ‘freedom fries’. The hidden treasure in this place is the Jungle Boy bar out the back. To get there you need to walk through a mysterious refrigerator door into a suprisingly leafy backyard with a lovely, well stocked bar. It’s a bit like stepping into the hipster tardis and getting transported from Boston to Bohemia.

But for the most part the US fastfood explosion comes without the hidden extras (other than saturated fats). Some of the new crop, like Bowery to Williamsburg in Oliver Lane just off Flinders Street, seem to be trying so hard to capture New York chic that it’s almost cultural cringe writ large. All the condiments come in glass jars and the sandwiches and bagels are served on metal plates, but at $16.50 for a sandwich with a paltry side of pretzels and a pickle, the price is the most inauthentic thing about the place. On a positive note, at least they offer a decent vegetarian option of halloumi and eggplant on a sesame bun, and for the most part the food is more New York healthy than Texas stodge.

Which is more than can be said for places like Ribs and Burgers in Separation Street in Northcote (if you can imagine a hipster McDonalds it might look like this) or Massive Wieners in Chapel Street, which is essentially a glorified hot dog stand. I do get the appeal of joints like Ziggy’s Eatery in Carlisle Street in Balaclava that seem to be on a mission to perfect the creation of a modern gourmet burger, and I’m told by meat-eating friends that they come close with their Big Blue Burger with blue cheese sauce and American bacon.

Perhaps the most successful of these ventures are the ones that fuse the best of fresh, healthy Australian produce with American style portions and recipes. New York Tomato in Richmond pulls this off admirably, including gluten-free and vegan options among the specials such as Spanish baked eggs, topped with crumbled feta, served with chipotle and sourdough toast. It’s a reminder that the more cosmopolitan parts of the US draw culinary influences from many sources, and we don’t need to confine American eating to burgers and hot dogs.

I don’t know if this move towards American eateries in Melbourne has come about as a result of Aussie kids who grew up on a diet of McDonald’s suddenly coming of age and thinking a slighly slicker modern presentation for essentially the same unhealthy, heart disease-inducing diet makes it cool all of a sudden. As for me, I’m reminded of the horrible figure lurking out the back of the Winkie’s restaurant in David Lynch’s Mulholland Drive. Chic packaging, same monsters lurking. Buyer beware.

This story first published in The Guardian