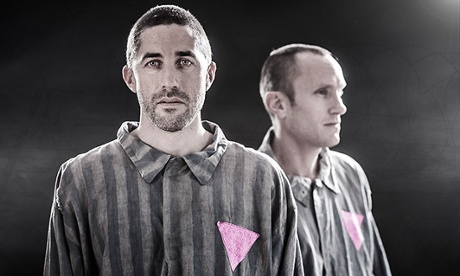 In 1979, Martin Sherman’s story of the persecution of homosexuals at the hands of the Nazis, set in World War II Germany, first hit the stage in London’s West End. The play starred a still-closeted Ian McKellen, and was hailed as essential, ground-breaking theatre.

Fast-forward to 2014 and a new production of Bent is being staged by Cut Lunch Productions at Theatreworks, in Melbourne. The play still feels relevant, as a humanist reminder to never take hard-won liberties for granted – even as modern battle lines around gay liberation have shifted dramatically since Sherman’s time of writing.

But it’s hard to avoid the question: where are today’s vital voices in queer theatre? And why has it become so increasingly rare to find new GLBTI voices or biting contemporary political critique amid a wave of reinterpreted classics?

This new production from Cut Lunch Theatre needed more work; some of the scene transitions in the first half feel rushed and could benefit from stronger staging. But once the direction strips back to the play’s core – the sexual and emotional journey between two lead characters, with the dehumanising brutality of the concentration camp laid out as a backdrop – the work’s transcendent beauty and power still resonates deeply.

Perhaps one of the most interesting aspects of Bent is that although it documents the predicament of homosexuals under the Nazi regime, homosexuality remained outlawed throughout much of Europe for another 30 years after the second world war, meaning the story of thePink Triangles largely went untold. So it’s little wonder the work was hailed as a revelation when first staged.

But for theatregoers looking for contemporary work that speaks to the current era of queer lives and struggles in Australia, the pickings are rather scant. One recent exception was the Melbourne Theatre Company’s production of Gaybies, a show specifically commissioned for the Midsumma Festival in which writer Dean Bryant compiled interviews with 30 queer parents and their children and distilled it into a strong narrative work performed by top-shelf Australian actors including Trevor Ashley, Virginia Gay and Magda Szubanski.

Aimed at a mainstream audience, the work manages to avoid the dangers inherent in producing this type of agenda-driven political theatre, such as coming across as overly didactic or proselytising. And it does so by sourcing dialogue from the stories of real people in modern Australian queer families. The human, and at times surprising, anecdotes make for engaging, highly relevant theatre.

In fairness, there are a number of Australian companies doing an exemplary job of reinterpreting, modernising and injecting contemporary themes into classic works. The Rabble, headed up by Melbourne performers Kate Davis and Emma Valente, has recently staged productions of Orlando and Salome, and in 2010 was nominated for three green room awards. Rabble shows are always edge-of-your seat experiences – dark, visceral, experimental and confronting – and often delve into subjects such as S&M and the subversion of gender expectations. Their vital and modern take on seminal queer work transcends any sense of looking backwards.

For an altogether more kitsch, camp and cinematic take on Australian queer theatre you’ll struggle to do better than Little Ones Theatre. Formed in 2007, this cross-dressing, singing, dancing, high-camp troupe has become a favourite to stages all over Australia, most notably for its hilarious 2013 production of Charles Busch’s camp classic Psycho Beach Party. High production values, a stellar cast and pitch-perfect humour make for hilarious romps.

The Sisters Grimm queer theatre collective, formed in 2007 by Ash Flanders and Declan Greene, are bucking the trend by producing new works such as Bumtown, Cellblock Booty and Summertime in the Garden of Eden. This work is unashamedly in-your-face, faggy, gross-out fun in the tradition of John Waters meets Jean Genet. In the stagnant waters of today’s Australian queer theatre, young companies like the Sisters Grimm are an essential and much needed reprieve.

One fears that, for the most part, with GLBTI in Australia so assimilated into mainstream culture, many audiences would prefer to look for queer narratives in US television dramas than support and nurture a local, edgy, queer theatre culture. That would be a shame because there are no doubt many stories – particularly from the margins of contemporary GLBTI life – that are crying out for a modern day Martin Sherman to take the reins.

This article first appeared in The Guardian