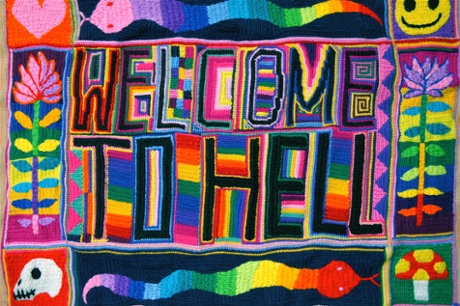 Stepping into Paul Yore’s world is a challenging experience. Despite having to defend himself against a child sex charge for his installation piece Everything is Fucked at a recent show – which police confiscated following a member of the public complained that it incorporated children’s faces into images of sexual acts – the 26-year-old Melbourne artist has just been selected to display new work in an upcoming group exhibition highlighting the work of young Australian artists at theMuseum of Contemporary Art Australia in Sydney.

He will join 13 young Australian artists to make up MCA’s Primavera show, an annual exhibition for artists aged 35 and under that will be held this year from 23 September to 30 November. Primavera guest curatorMikala Dwyer told Guardian Australia: “I have chosen Paul Yore because he is an excellent young artist. I find deeply intriguing his extraordinary ability to process and transform huge expanses of capitalist rubble into political, magical and almost spiritual zones of contemplation.”

The artist’s large-scale installation works combine hand woven tapestries with kitsch found objects, and often involve an aural aspect, creating multisensory immersion that teeters between celebration and abhorrence. Yore has described his work as both a celebration of queer culture and investigating the way gender and sexuality are constructed.

“The work functions on various levels. It has a sickly sweet surface – it’s very colourful and alluring, but then there are deeper things sitting just beneath the surface of the work that talk to more symbolic ideas of a society of excess, of consumerism, of frenzy and violence. There’s a darkness behind the work that’s sarcastically pointed to through the bright joyful aspects.”

The police removed Everything is Fucked from Melbourne’s Linden Centre for Contemporary Arts, where it was in the show Like Mike – a tribute to the late Melbourne radical artist Mike Brown (1938-97). Yore is a facing charge which he is legally unable to talk about, but which has caused an outcry about censorship.

Dwyer and the art establisment are standing by him, saying in a statement: “The MCA believes that artists such as Paul Yore are a driving force for creativity and that contemporary art should always be a medium for artists to convey cultural freedom and creative expression.”