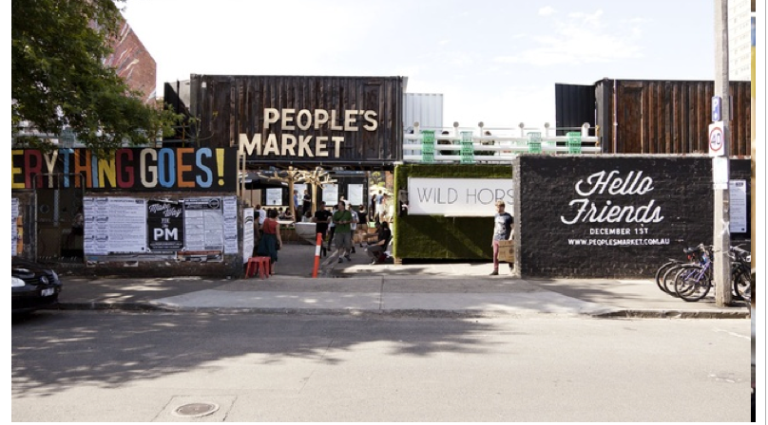 “What should young people do with their lives today? Many things, obviously. But the most daring thing is to create stable communities in which the terrible disease of loneliness can be cured.” – Kurt Vonnegut

I’m not sure if the kids who created the People’s Market in Collingwood had such lofty intentions, but I take my hat off to them nonetheless.

Just as I was feeling depressed about the pressure to join the Christmas retail jungle and curb crawling the back streets of Collingwood – the people’s market appeared like an oasis in a retail desert.

Here an old car park in Stanley Street has been transformed into a living, breathing centre of community life. The place at first appears to be the ultimate a hipster paradise – but my advice would be suspend all cynicism ye who enter here.

Complete with containers full of modern art and design, coffee roasting stalls, endless ‘pop-up’ cafe options, and several bars selling home brew ciders and beers – it doesn’t feel so much like a place to be seen as just an awesome community building exercise. I’m told that they also have workshops, live bands, yoga, and special entertainment events.

Where else could you expect to pick up unique prints of Melbourne themed street style art for twenty bucks direct from the artist, with the paint having barely dried, suspended in a container ten feet in the air, as I did today?

And what a more satisfying exchange it is to interact directly with the creator of such objects in an open air community space than to join the desperate mobs in the cities shopping malls.

And that’s saying a lot.